Ask the Code Guy a Question

Our resident “Code Guy”, Roger Papineau has been a long-standing, committed member of the Home Builders Association of the Grand Traverse Area, Inc. He served as President of the Association in 1996 and 2007 and has served as Chair of the Code and Bylaws Committees for many years. He is a respected and knowledgeable advocate for the Home Building Industry and affordable housing.

Congratulations to Roger for his appointment to the State Construction Code Commission: READ MORE

4/25/2016 The Michigan Bureau of Construction Codes has issued a list of corrections and interpretations to the 2015 Michigan Residential Code. The list can be found here.  More corrections are expected to be identified in the near future. Watch for future announcements.

The APA has recently announced the availability of a free design tool to aid in the identification and design of braced wall lines. The tool is available at http://www.apawood.org/calculator. Free registration is required to access the calculator.

The 2015 Michigan Residential Code went into effect February 8th, 2016. Part 5 Administrative Rules apply. All permit applications submitted by close of business 2/5/2016 will be permitted and inspected to the 2009 MRC. Code books may be purchased through the Bureau of Construction Codes. This is also available as a PDF download. Click on the link below. 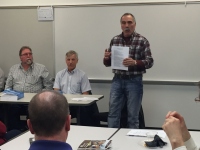 The Bureau of Construction Codes has published an advisory regarding "qualified" blower-door testers here.